How climate change affects the taste and nutritional power of vegetables 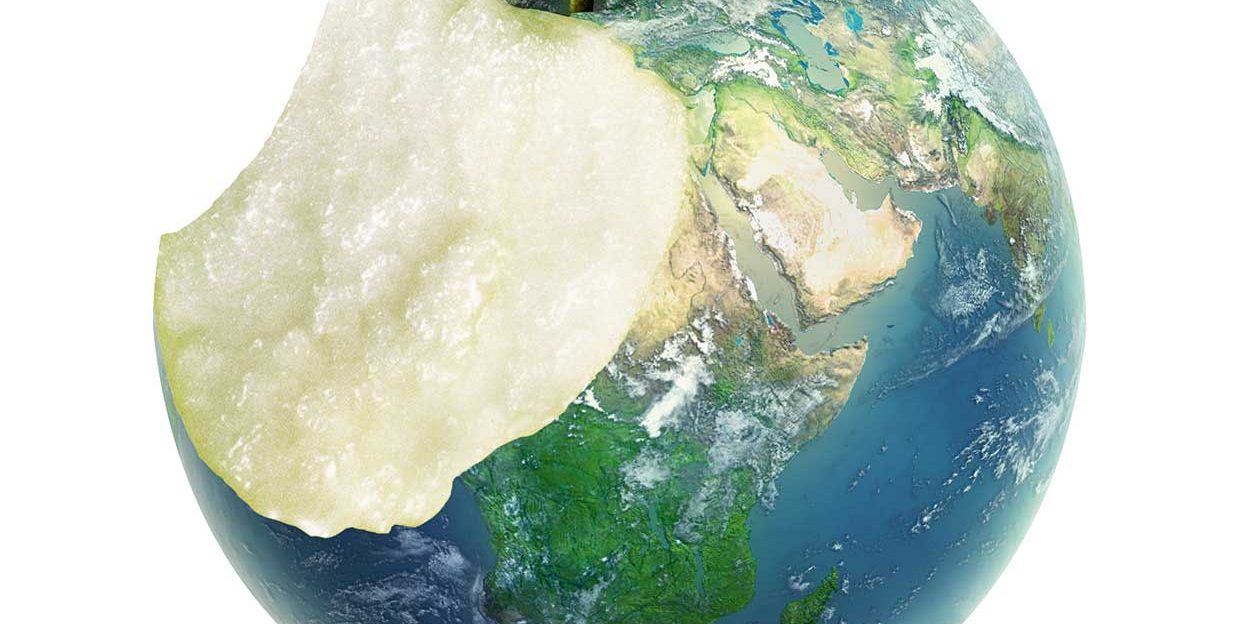 Interesting article analyzing the alterations that Climate Change is producing in 10 foods that we examined.

Apples are less crisp, lettuce more bitter, grapes more acid… Global warming is already affecting the taste, shape and nutritional power of fruits, vegetables and legumes that we eat. And the process has only just begun.

The climate change It tastes like sweeter apples but much less crisp. To more bitter lettuces. Even a less acidic wine with more alcohol. The temperature has already risen one degree with respect to the average of the pre-industrial era, but climate change also brings sudden changes in temperature, droughts… Add to this the greenhouse gases and we find ourselves before a complex phenomenon that already affects fruits and vegetables. To survive these changes,

Beans that grow at a daytime temperature of 27 degrees and a nighttime temperature of 22 are much smaller than those that grow six degrees cooler. Brief periods of heat cause the peas to accelerate their ripening, which, again, leads to smaller products. Lettuce can develop a swollen, less dense head, while showing symptoms of chlorosis (lack of chlorophyll) and an increase in bitter-tasting compounds. Burnt leaves may appear, something that is also seen in broccoli or cabbage.

And often it’s not just that they’re uglier, but they can also be less healthy: tomatoes grown at too high a temperature will have fewer macronutrients and fewer carotenoids, an antioxidant pigment that helps maintain blood pressure or to fight the cancer.

It’s not all bad news, though. Thermal stress, for example, causes lettuce to have “more lactones, which are known as natural ibuprofen,” explains Aurora Díaz, from the Aragón Agri-Food Institute. They give a bitter taste to the vegetable, but they are beneficial for health. “For a few years now, we have opted for less bitter varieties of vegetables and perhaps we should rethink it,” reflects the researcher.

To deal with the climate change, Díaz proposes researching varieties that are more resistant to heat and water stress and also looking at wild varieties, survivors by nature that could hide many keys to adapting our crops to a changing situation. “An effect that we are already seeing is the lack of winter cold,” explains Javier Rodrigo, from the Center for Agrifood Research and Technology (CITA) in Aragon. Temperate zone fruit trees have adapted to survive the low temperatures of winter.

When the leaf falls off, they enter a state of rest that allows them to endure 20 degrees below zero. And they need that cold to flourish. It happens that, with the increase in the temperature, they take longer to accumulate the cold they require for the correct development of the flower. And, therefore, the cycle is delayed: they take longer to develop the flower. He has seen it in the cherry trees he grows in his experimental orchard.

It also happens that there are varieties that are not enough by themselves: they need what is called cross-pollination; that is, from the pollen of a different variety to reproduce.

But what if they react differently to changes in temperature? They will no longer bloom at the same time. “We always tell farmers to plant compatible varieties and to match in bloom. Now we complete it with a piece of information: they must have similar cold needs.”

Not only are they uglier, but they may be less healthy: tomatoes grown in high heat have fewer nutrients and substances that protect against cancer

What the expert explains about cherry trees we can take to other species. From the olive tree to the pistachio, going through cereals or vegetables. The peninsular map of orchards and plantations is changing and some crops will no longer be viable in certain areas. It is already being seen with the vine. The high temperatures, together with high concentrations of CO2 in the atmosphere, have altered the taste of the grape: more acid and with more sugar. The most pessimistic studies maintain that, in a few decades, the regions of southern Europe will be too hot for wine production, which could be displaced to the north.

The same occurs with rainfed crops, such as wheat or corn. A study affirms that production in southern Europe will have fallen by half by 2050. Beyond this regional variation, a change in the organoleptic characteristics of certain crops is already being seen. One study evaluated how Fuji and Tsugaru apples, two very popular varieties in Japan, had been spoiled. They observed that in 40 years they had gained in sweetness, but lost acidity and hardness. Some changes that, as they occur gradually, would have gone unnoticed by the consumer.

“But if you could taste an apple harvested 30 years ago, you would feel the difference,” says Toshihiko Sugiura, the specialist in charge of the experiment. The same can be said of carrots, which have lost flavor, or of cabbage, more bitter; the aubergine grows with greater deformities, which, at least, affects the value of the product when it comes to selling it. In return, products such as sweet potatoes or mangoes could gain prominence in regions where until now they were barely grown.

• The lack of rainfall in spring has made the cereal grow less and the high temperatures are reducing the concentration of starch, an important source of energy in our diet.

• In return, genetic improvement has doubled the productivity of wheat in the last 50 years. Work is already being done on varieties that are resilient to climate change.

• High temperatures mean that the plant does not complete the cold cycle during the winter and the fruit loses consistency. The skin of the pulp is detached and is more vulnerable.

• In return, some good news: in the absence of water, the fruit can react with a higher concentration of sorbitol, a natural sweetener that favors the growth of beneficial bacteria in the Intestine.

• The cold is fundamental for the apple trees and pear trees. Depending on the variety, they need between 500 and 1,500 chill hours. The size of the fruit and its firmness depend on it.

• In northern Europe, warming has advanced flowering. In the Mediterranean, the varieties that need the coldest show incomplete flowering and the fruit is lost.

• Heating also causes poor pigmentation in the skin and reduces the presence of anthocyanins, responsible for the red color of the fruit and beneficial for our health.

• Good news: according to a study carried out last year in Asturias, the increase of 0.30 degrees centigrade per decade in the region since 1978 has not affected apple trees. Local varieties have been able to adapt.

• Climate change has accelerated its annual cycles and this affects the chemical composition of the grape and also the taste of the wine: less acidity, more alcohol and greater proliferation of microorganisms and mycotoxins (produced by fungi).</p >

• Water scarcity also results in grapes being small and with a high concentration of phenolics (they give the wine color and affect its quality). And also that it has a lower concentration of malic acids.

• The result is that vine cultivation is already moving north or to higher plantations.

• It’s not all bad news. High temperatures and lack of water cause the fruit to accumulate anthocyanins, which act as antioxidants and protect the grape from the heat.

• Global tomato production has tripled in the last four decades. But in Europe it is declining. In countries like the United Kingdom there have been periods of scarcity (and sky-high prices). So scientists are engineering heat-resistant varieties.

• The problem is that high temperatures, those above 35 degrees, decrease pollen viability and reduce flowering. That translates into lower crop yields and less intense color.

• The Mediterranean area continues to be optimal for tomato growth. The same does not happen with North Africa, except for the coastal strip.

• The dry environment and high temperatures cause pests. In Mallorca they have been suffering for years from the invasion of the tomato caterpillar, Manduca quinquemaculata.

• When the temperature exceeds 30 degrees, burns or necrosis occur at the ends of the leaves. For this reason, a displacement of crops towards the north is already observed in Spain.

• The lettuce also needs noticeable changes between day and night temperatures. If not, it develops chlorosis (that is, no green coloration due to lack of chlorophyll) and accumulation of bitter-tasting compounds… which are often healthy.

• As it has small roots, it is very vulnerable to lack of water. To combat it, the plant develops healthy compounds such as polyphenols.

• Work is already underway on gene editing in lettuce. Currently, seeds are used that allow short cycles of lettuce cultivation to be completed: ready in 30 days.

• This vegetable needs plenty of water. So in years with little rainfall it has less flavor and a less crisp texture.

• High temperatures make them less sweet. And an excess of water like the one that can cause torrential rains leads to the appearance of cracks.

• Like the rest of evergreen trees, it needs a good dose of cold during the winter resting phase. In regions such as the southern United States, its development is already being threatened. Also in Spain, Italy or France.

• The lack of water increases the concentration of bioactive compounds and glucose and fructose, which translates into sweeter peaches. But also in smaller fruits and altered ripening cycles.

• A high exposure to CO2 increases the concentration of sucrose, lactone and norisoprenoids in the fruit: all these compounds contribute to a pleasant taste.

• Last year, kiwi production in Europe was 700,000 tons: 3 percent less than in 2020. Since 2015, 15 percent of production has been lost. Reason? Spring frosts and the disease called ‘kiwi moria’ in Italy, the main European producer.

• The high summer temperatures have also affected their production. They cause a deterioration of the roots and result in larger plants, but with fewer fruits. And fewer flowers the following season.

• The increase in temperature accelerates the cycles, which forces an early harvest, with a lower maturity level. And an olive of poorer quality and smaller in size.

• The olive tree is very tolerant to lack of water. It even gives rise to a better quality oil as long as the hydric stress is not excessive, which leads to a more bitter oil with a lower content of oleic acid and aromas.

• High temperatures in summer, when the fruit develops, cause a reduction in proteins in the olive.

• The viability of the olive grove depends a lot on its variety. The hojiblanca, manzanilla, picual or nevadillo are already threatened in Andalusia due to the absence of cold hours in winter and the lack of rainfall in summer.

• It is native to the Kalahari desert (where it still grows wild) and was already present in the Ancient Egypt. This shows its resistance to heat. In fact, high temperatures reinforce its sweet flavor.

• Despite their high water content, they remain a safe bet in arid and semi-arid climates, such as Morocco.

• In recent years, many local varieties have been replaced by others genetically modified to suit the consumer: smaller, sweeter and seedless. But less adapted to present and future climatic conditions.